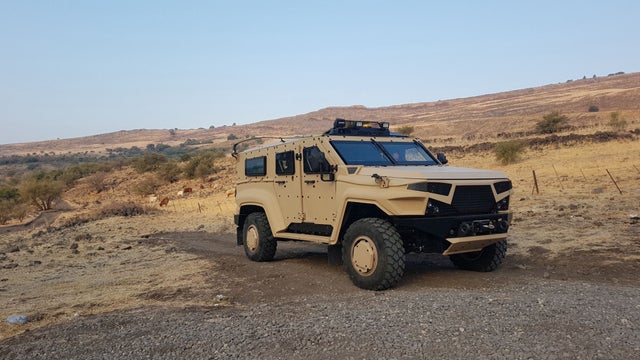 The PlasanSandCat is a light armoured vehicle designed and produced by Plasan of Israel. It is a family of vehicles that has become a world standard of its class, a popular product around the world and also a capability demonstrator for Plasan who mainly design and supply armoured vehicle bodies to military vehicle manufacturers for their own products.

The 4 generations of SandCatare distinguished partly by the generation of the Ford Super Duty chassis that they are built on.
2004 – 1st generation 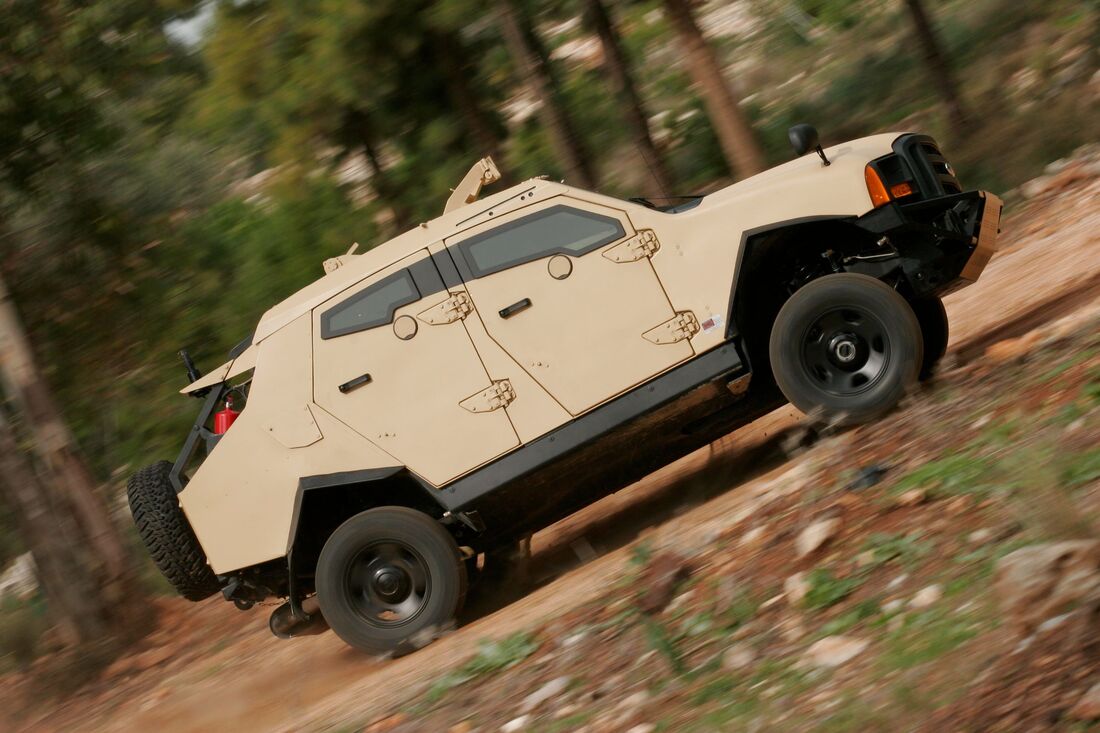 The project started as a system demonstrator and with an eye mainly on the local Israeli market. The idea was to take a commercially available chassis with high GVW and to shorten and downgrade it so that it is well within its safe limits; the opposite of what is usually done which is to take a light 4x4 and to stretch it beyond its capabilities. The Ford Super Duty was chosen due to its high power, payload, durability, and availability.
​
The distinctive side windows feature already on some of the earliest sketches. They were optimized to reduce the mass of the heavy armoured glass while maximizing useful viewing angles and became an important part of the SandCat signature design language.The early vehicles were called Caracal and the feline design theme has also followed the vehicle as the design has evolved over the years.

The first generation SandCats were a series of prototypes, mostly on a 116" (2946mm) wheelbase and 5m length. It was first shown publicly in late 2005 and various different variants were displayed and promoted. One of the early prototypes featured in the hit movie, World War Z, transporting Brad Pitt to fight the Zombies.

The first production run was a small number for the Swedish police and those were the only ones sold based on that 1st generation design that still had most of the front end from the civilian Ford F350/450. These vehicles had a slightly longer body with a station-wagon form factor for 8 people. 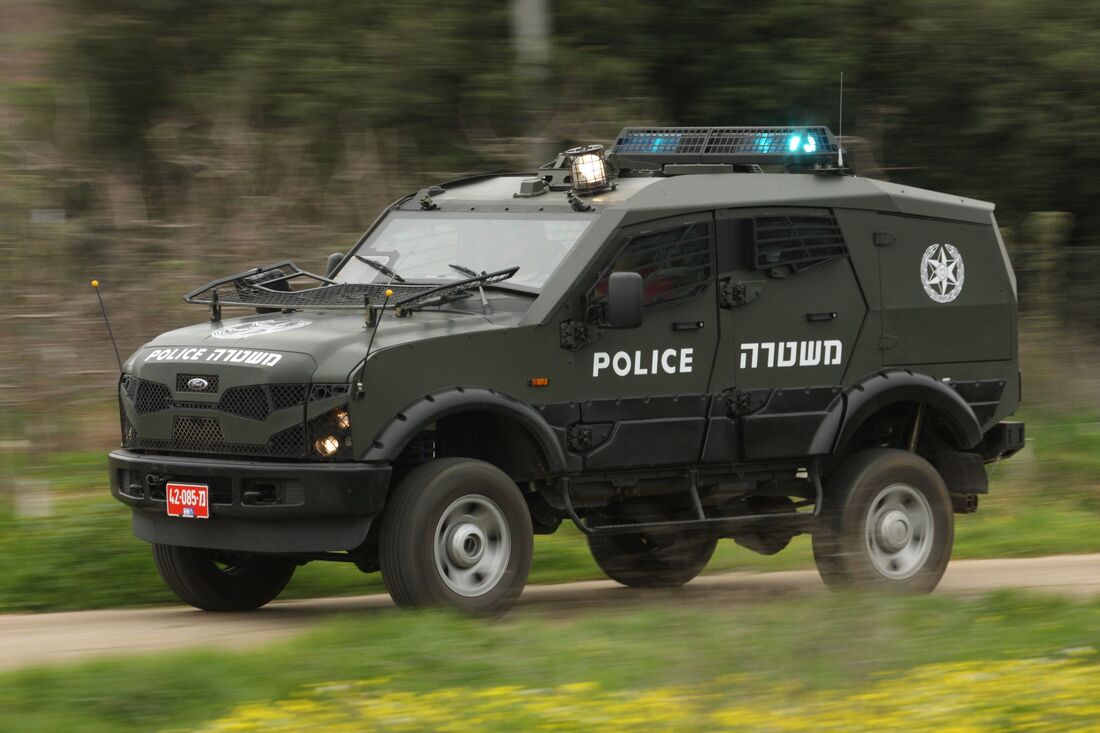 When Ford updated the Super Duty for 2008 the SandCat underwent its first redesign. SandCat had started mostly as a way for Plasan to demonstrate to their partner-customer OEMs how they could take any automotive platform and design an armoured hull for it, but it had become a well-received vehicle that end-users were asking for directly as a whole product.

As Plasan was still very much focused then on partnering with OEMs, and still doesn't want to compete with their own customers as a vehicle manufacturer, for this generation theypartnered with Oshkosh Trucks to assemble, market, and support the SandCat. Although still maintaining the Ford bonnet, a new feline grille and lights was designed that could accept either the Oshkosh badge, a generic SandCat badge, or for the local Israeli market where the Ford distributor sold the vehicle, a Ford badge. Still shortened to a 116" wheelbase there were two body styles, a 5-man "Utility" like the early prototypes, and an 8-man "Transport" variant that both actually have the same overall 5m length.

For the South American market Oshkosh chose to retain the Ford grille and headlights. The Israeli Border Police got a version of the Utility with storage boxes over the rear wheels. The Bulgarian army have a mixture of Utility and Transport variants, while Oshkosh sold their version of the Transport, branded as TPV, as mostly a police/SWAT vehicle to the North and South American markets. A few of these TPVs had a role as the SWAT cars of the Gotham City Police in The Dark Knight Rises and one was entered into the Trans-Israel Rally-Raid as part of Plasan's testing programme. 2nd generation SandCats were also sold elsewhere in Africa and Europe.

For various reasons, this generation has the least consistent design, although they are all recognizably SandCats, many customers got a unique version of it, so there is a real mix of different noses, wings, windows and body configurations, and when the 3rd generation was developed a big aim was to reconcile this and have a more consistent coherent product.
2014 – 3rd generation facelift

​The 3rd generation SandCat got a facelift in 2014 when a military customer specifically requested a harder look for a relatively large order of vehicles. The softer Stormer look was still available but the harder edged design, with its new armoured grille in place of the plastic SandCat grille became the standard. The only significant change to the body itself was a squarer 3rd side glass in place of the more triangular original design. Otherwise the differences were largely cosmetic changes to the wings and side steps, with less shape and tapering to the rear flanks. This version did broaden into a much wider Family of Vehicles though with single-cab, double-cab, and other variants tailored to particular missions or payloads. This version has also been more widely "white-labelled", assembled and named locally, so for example the version assembled in Poland is known as Szop.
2018 – 4th generation 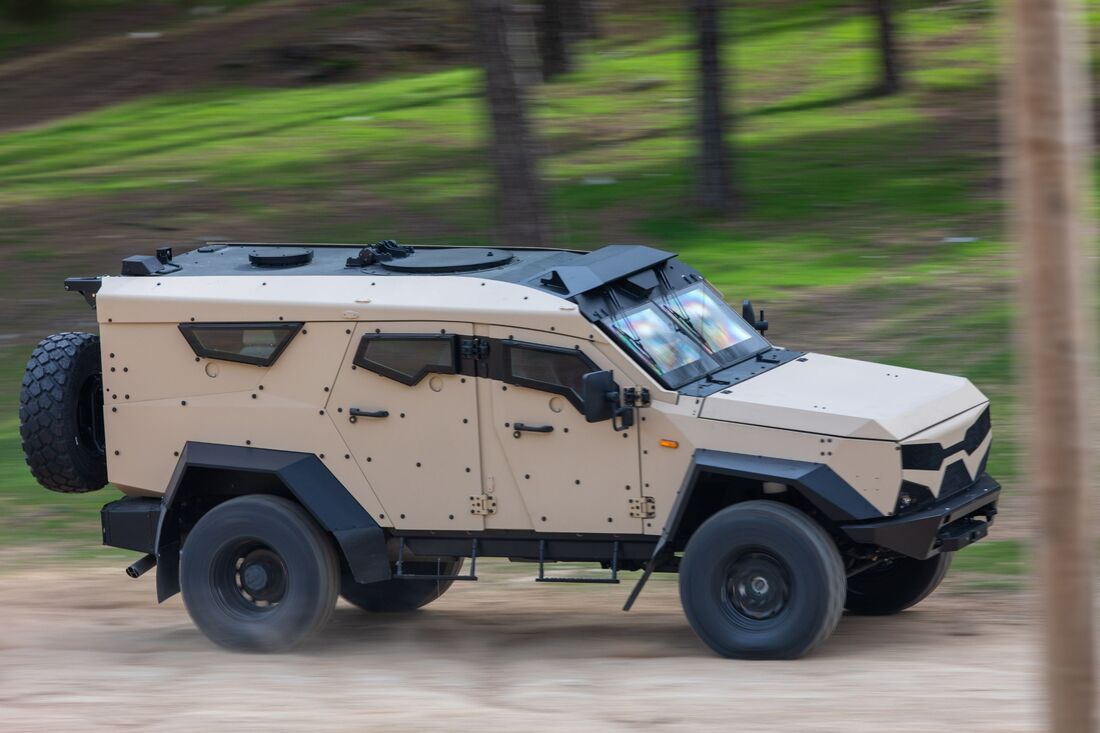 ​By now the SandCat had been sold to users in more than 16 countries over 5 continents and it had become one of the most ubiquitous vehicles of its type, very recognizable, well-known, and respected in the military/paramilitary world. The new 4th generation redesign has taken into account all of the lessons learned and customer inputs from the previous generations. The success of the SandCat has led to imitators and has raised the level of design in competitor vehicles.

When the SandCat came out it was the first of its kind, and one of the first armoured vehicles to have a deliberately designed and styled appearance.It was very important to Plasan not to change too much or stray too far from the now iconic SandCat look while still moving the game forwards compared to the SandCat's rivals.

​The 4th generation architecture has more designed-in commonality and modularity to allow the manufacturer to make more variations with fewer changes and to further tailor solutions to different customers without major redesign each time. Finally the Ford bonnet was replaced with a bespoke Plasan design with a signature "cat's ear" feature, so there are no visible Ford parts any more. The new front is designed to more easily allow for localization or alternative identities. So the front grille is a mask that can be easily replaced with alternative designs to give it a different face according to customer requirements or taste. The default is a new interpretation of the feline SandCat grille first introduced on the 2nd generation model. A new window design manages to maintain the key lines of the very distinctive SandCatglass profile while maximizing commonality for a lower logistic footprint of these often-replaced parts. The wings revert a little to the more dynamic angular shapes of the first 2 generations giving the new model a look somewhere between the more dynamic but softer early 3rd generation model and the later squarer one. The flowing arched lower roof line that is also a signature SandCat feature is now more pronounced having been lost a little on the 3rd generation designs. The door handles, now a unique pull-handle design, sit on a line that flows smoothly from the grille, through the front wings, and up to the crease in the rear sides.

Structurally most significantly, the first (although not all) 4th generation SandCats does away with the chassis rails of the Ford and is the first to be a full monocoque. This M-LPV model allows much higher underbody mine/blast protection without adding excessive height or weight to the vehicle. There is still a lower cost model with a chassis known as the SandCat mk4, but the 4th generation architecture has been designed to maximize commonality even between these technically quite different vehicles. Finally the range is completed by the StormRider, a supersized SandCat with independent suspension, higher protection for 10 occupants, and a greater 11.9t GVW. 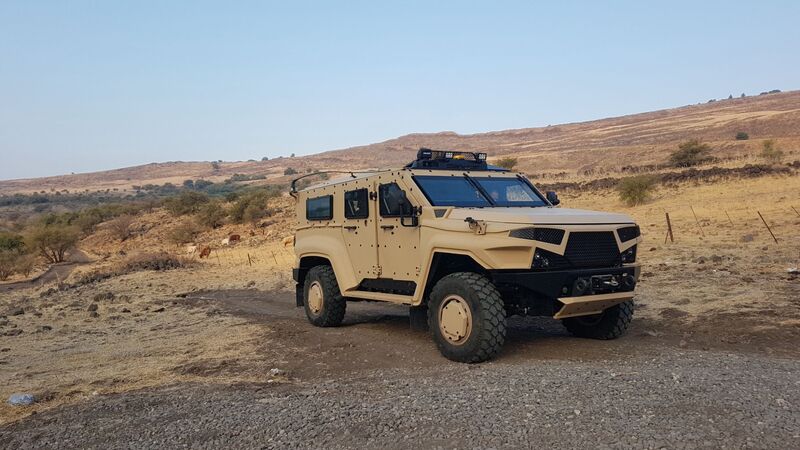 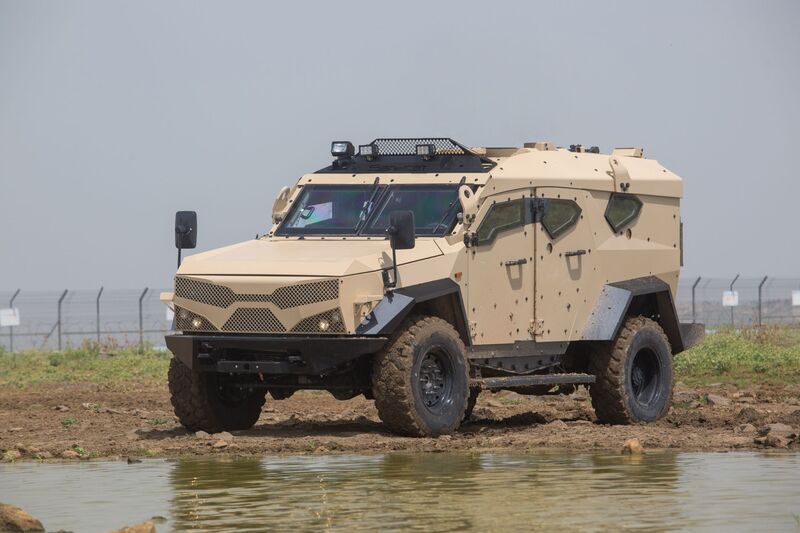 SandCat M-LPV
SandCat Mk4 Price:
The price depends on the final specifications, and a multitude of factors and requirements, so the price is very sensitive. As a guide, according to the brand, it can be considered that the price of the Plasan SandCat starts at $ 250,000 (€ 212,400 approx.)