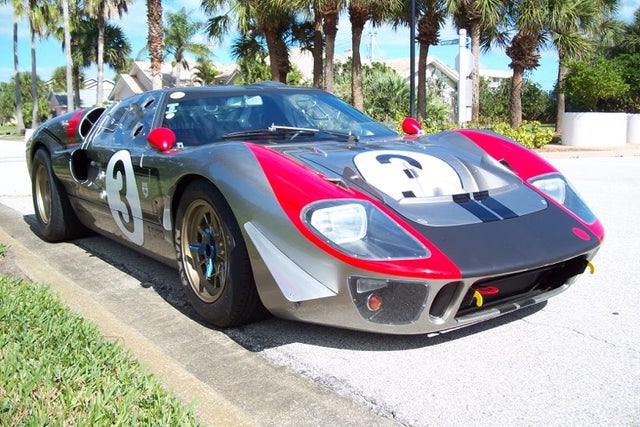 Pathfinder GT40R is an uncompromising GT40 replica built with racing in mind.

This is a FIA licensed continuation car. So, it can be legally called "GT40". Chassis number includes letter P, which picks up where the original series left off. It's assembled in accordance with the original Ford guidelines for GT40s.

This high quality re-creation of the original GT40 can be fitted with FIA certified engines, just like the original. So, it can be configured to be no different from the GT40 made in the 1960s. In fact, more than 85% of the rolling chassis components can be interchanged with the original GT40, including the highly complex "monocoque" chassis.

So, it's indistinguishable from the original one, with even small details, such as windshield wipers that operate at speeds exceeding 150 mph or the period-correct aerodynamics.  It's bolt-for-bolt identical to the original car.

Previous Superformance GT40s have been designed as road-legal cars. This version developed in cooperation with Pathfinder Motorsports is specially engineered for racing, with the handling and acceleration of a super sports car. And with all modern security measures approved by the FIA. In addition, Superformance vehicles are sold without engines and gearboxes. This version includes a Holman Moody engine and a ZF gearbox.

Each car is made by skilled craftsmen. Despite being low-production cars, they are manufactured in modern factories that currently employ more than 500 professionals.